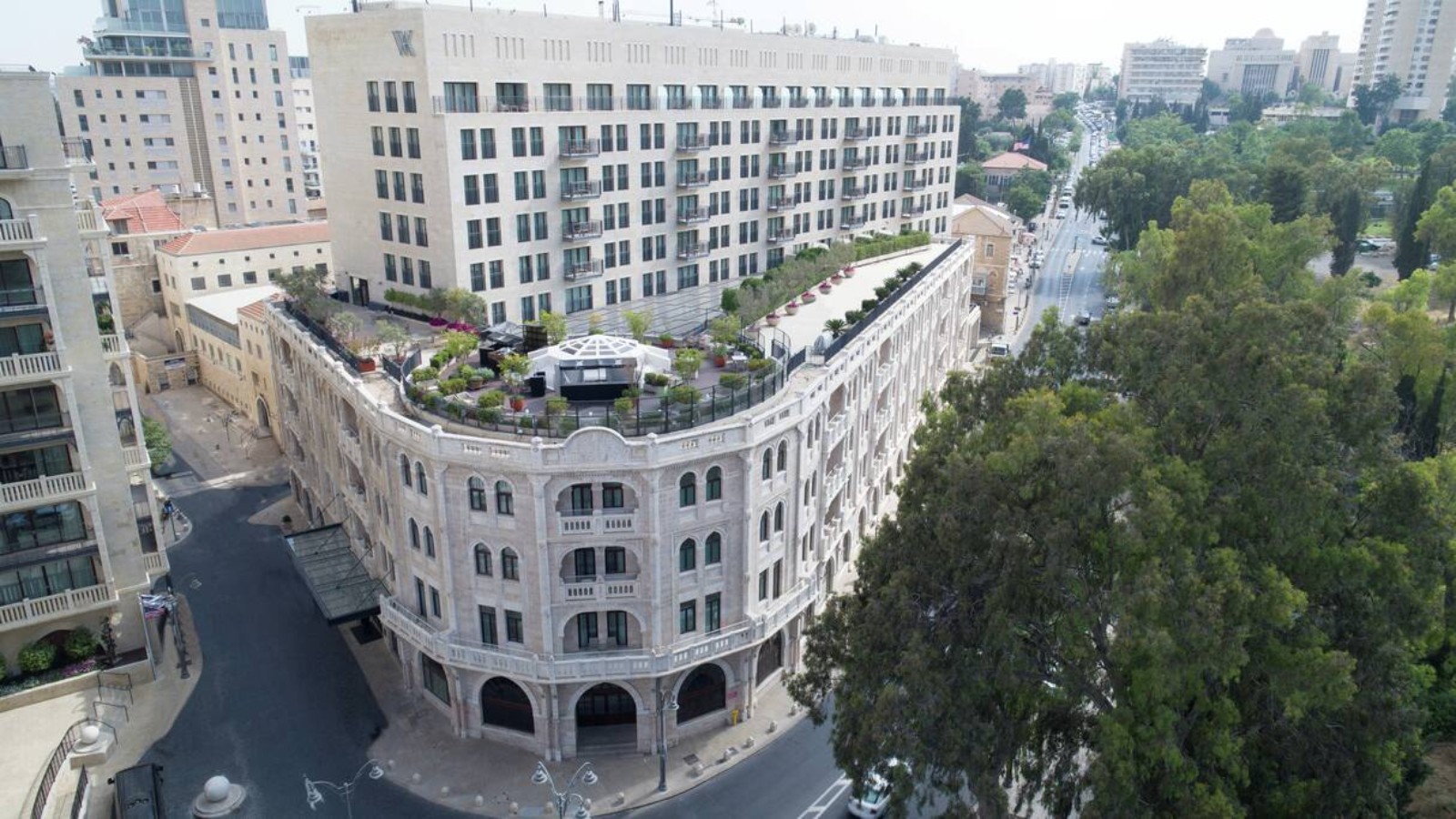 For the hospitality industry in Jerusalem as in other cities, there was a lemon and there was lemonade.

The lemon: two difficult years without foreign tourism. The lemonade: an opportunity to redecorate, remodel or expand for the day when guests would return – and that time has come.

If you’re planning a stay in Israel’s capital city, you have a wide range of choices from downtown hotels to historic boutique hotels in quieter neighborhoods, from large chains to mom-and-pop-style accommodations.

No matter where you choose to lay your head, you are likely to start your day with a classic sumptuous Israeli breakfast as part of your overnight package.

Here are our choices for 18 remarkable hotels in Jerusalem in various categories. 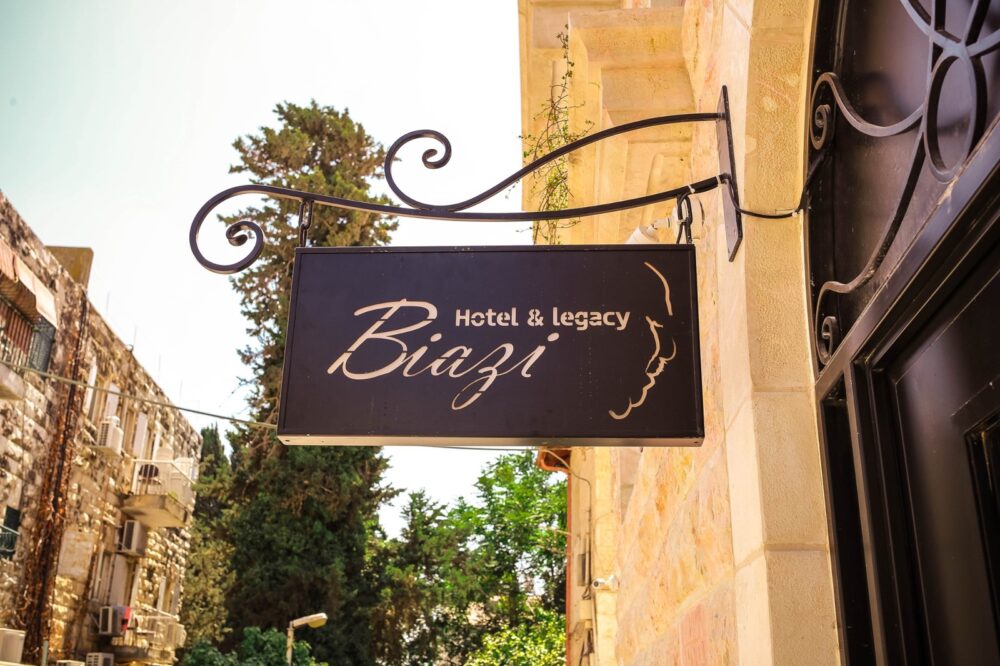 Located in the quaint Nachlaot neighborhood near Machane Yehuda market, Sacher Park and the Supreme Court, this family-owned boutique hotel is named in tribute to Eliyahu Biazi, a Turkish Jew who reached Jerusalem in 1933 via donkey, raft and horse-drawn cart.

Biazi became a well-known confectioner, and accordingly the hotel’s five upscale suites are named after the legendary cakes he baked: Sabrina, Berlina, Napoleon, Strudel, Honey Cake. (Despite the food references, however, the Biazi does not serve breakfast.)

Address: 26 Kfar Bar’am Street
Amenities: Rooftop terrace, private catered events
Parking: on Shabazi Street next to the hotel, based on availability, at an hourly rate from 8-6 using Cellopark/Pango application
Click for reservations 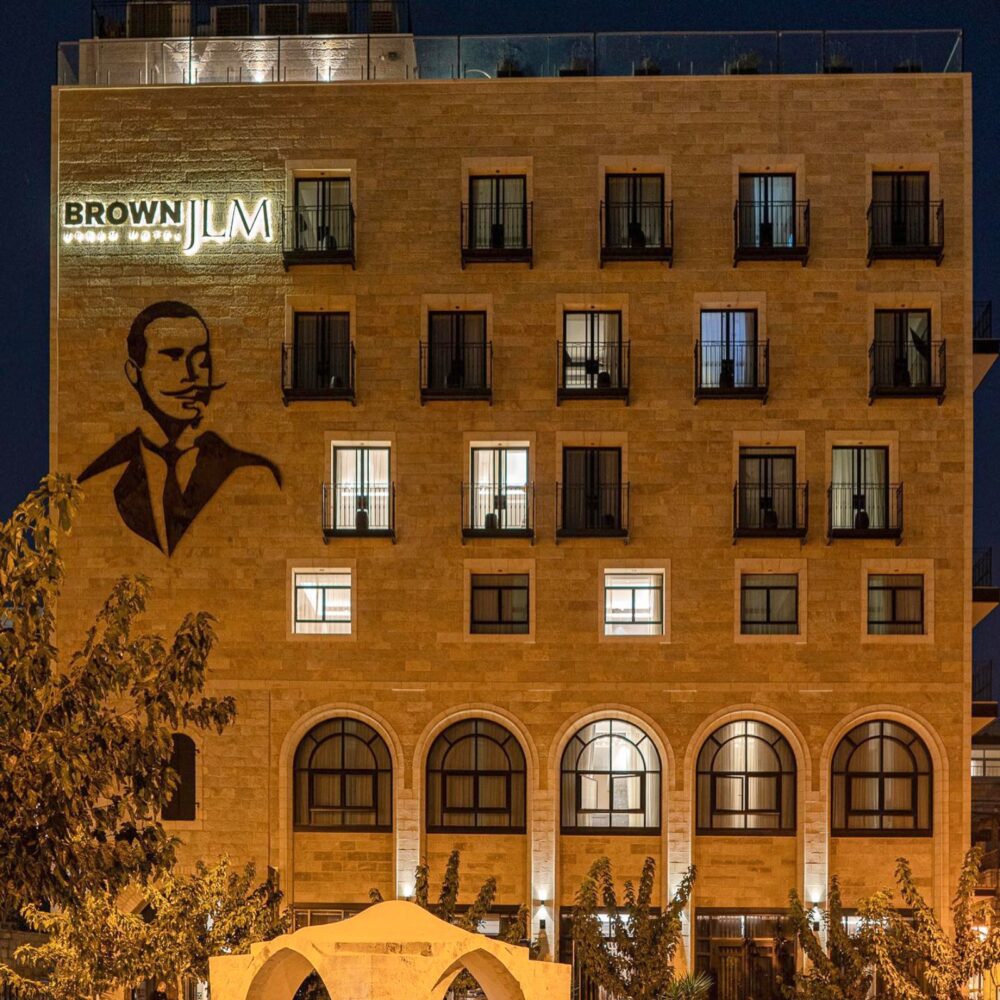 Right in the city center overlooking Independence Park and the soon-to-open Museum of Tolerance, the 46-room Brown JLM by Brown Hotels is housed in a historic 19th century building that has been renewed and augmented with six new floors. Preserved painted ceilings in the lobby add to the authentic feel along with vintage collectors’ items. 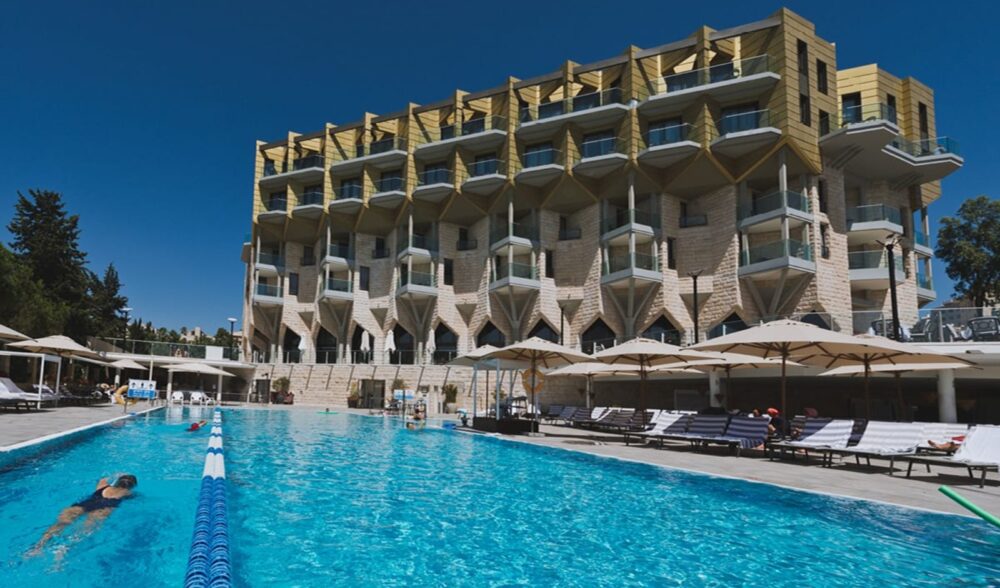 This consistently award-winning 5-star hotel has added two floors and 51 new suites and rooms for a total of 331. There’s a new fitness and spa complex with swimming pool and a new kosher chef restaurant. The hotel’s existing rooms also were renovated. 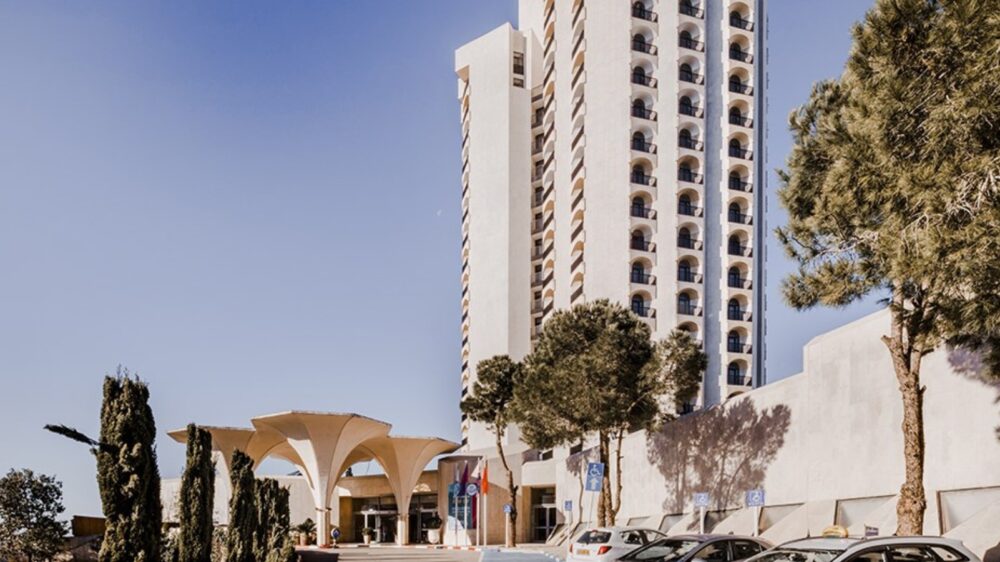 The entrance of the Vert hotel. Photo courtesy of AFI Hotels

Formerly known as the Jerusalem Hilton and then the Crowne Plaza Jerusalem, this 21-story iconic hotel sits conveniently next to the Jerusalem Convention Center; light rail, train and bus stations; and very near Machane Yehuda market, the Supreme Court, the Knesset and other attractions.

A massive remodeling project completely separated the two-building complex, with 138 of the 388 rooms and suites renovated and allotted for Vert guests. The remaining 250 units in the other building were transformed into residences.

One of the changes introduced is hinted at by the name Vert (French for “green”): There are policies in place for reducing the use of paper and plastic and increasing the use of natural and biodegradable materials, recycling and solar energy, with a commitment to go entirely green by 2025. 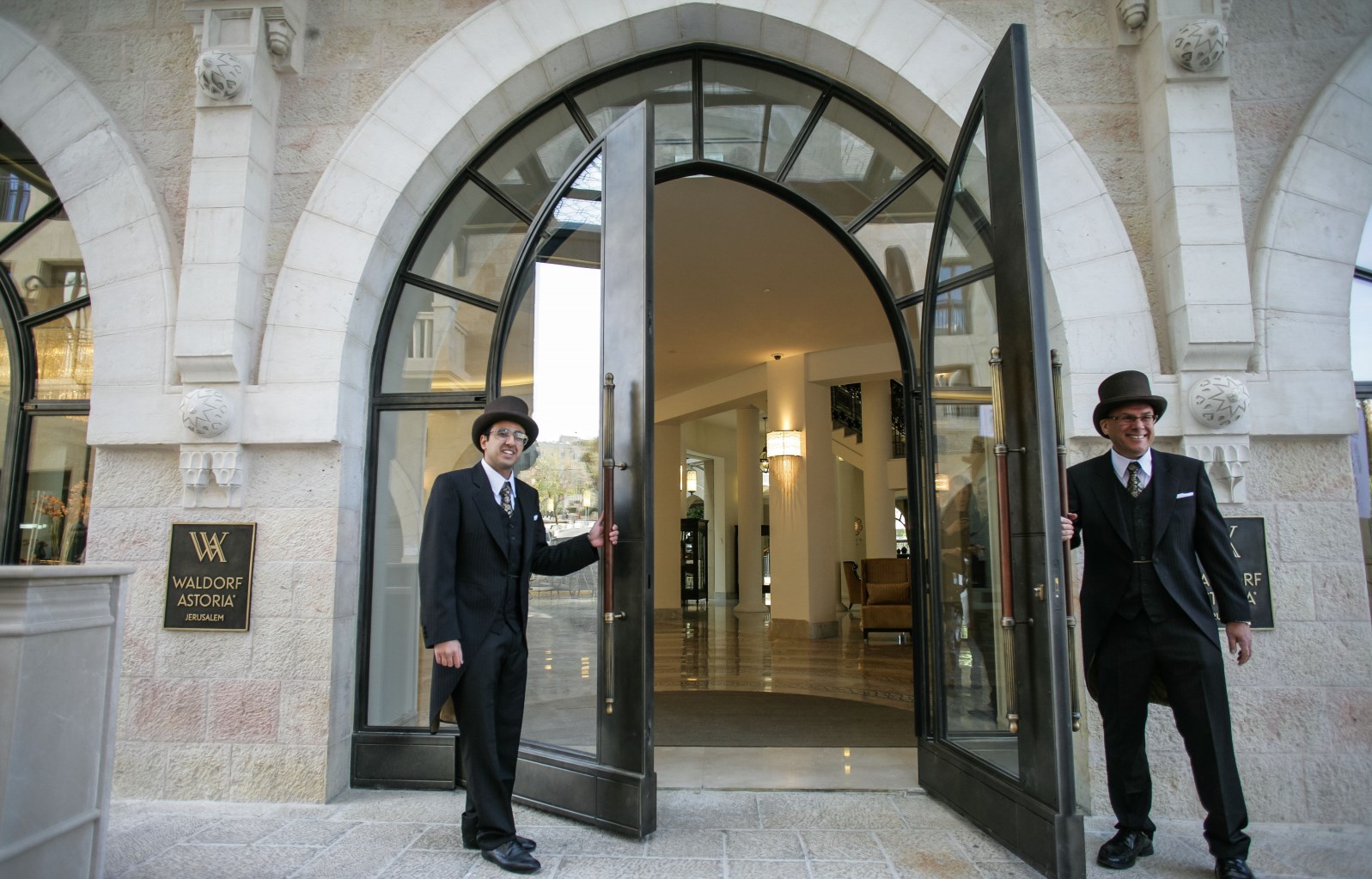 Designed by award-winning Turkish architect Sinan Kafadar and Israeli architect Yehuda Feigin, the 226-room Waldorf opened in March 2014 as the only internationally branded luxury hotel on a street that also hosts the 5-star Mamilla, David’s Citadel and King David hotels.

Order a slice of the Waldorf chain’s legendary Red Velvet cake to savor in the jaw-dropping lobby, which includes a special Waldorf Astoria clock designed by Avraham Aborgil with four faces adorned with Hebrew, Arabic, Roman and European numerals. 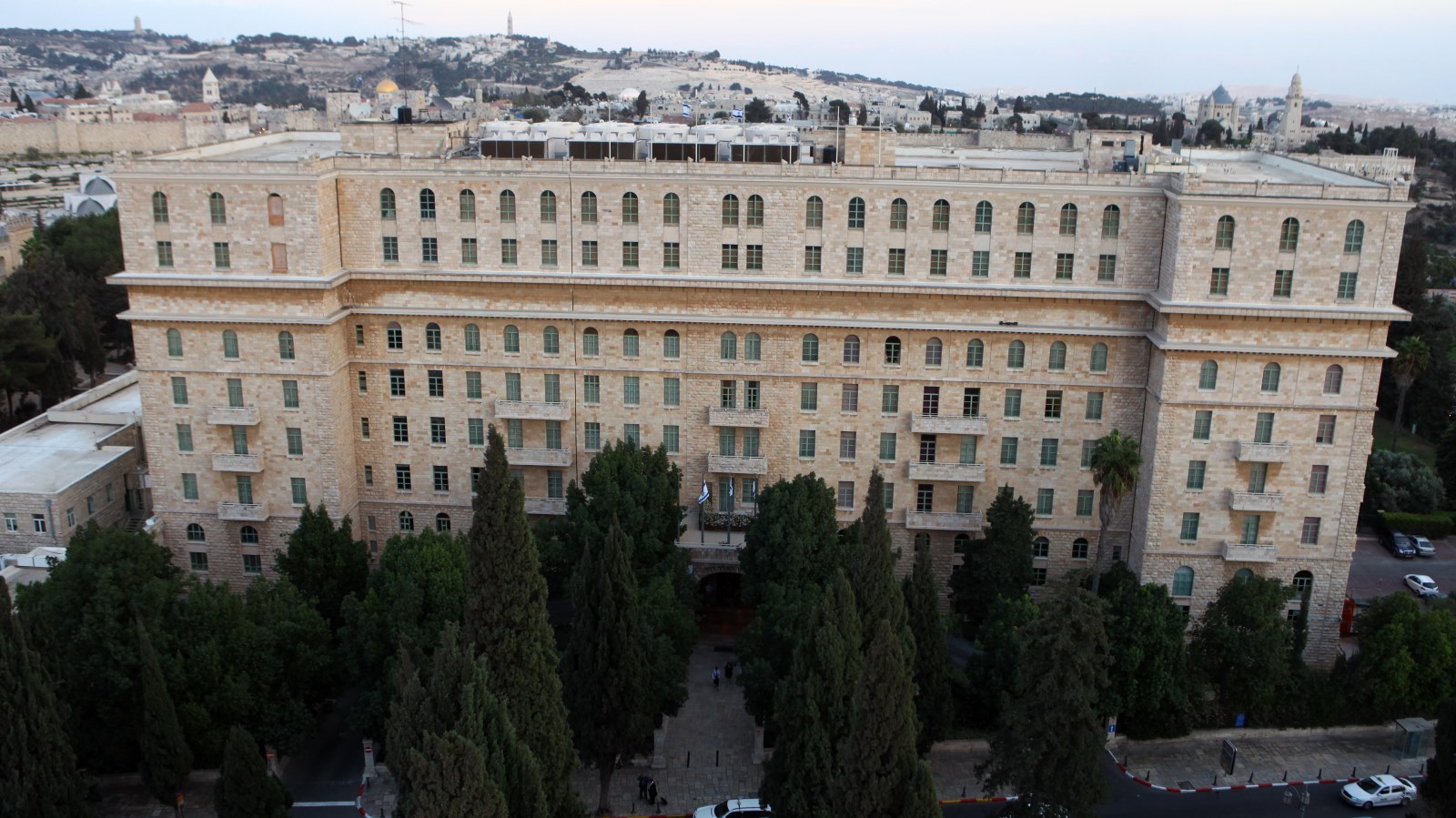 Opened in 1931, the award-winning 206-room King David is a venerable landmark in Israel’s capital city and consistently ranks as one of the top 100 hotels in the world. It’s classic and classy. 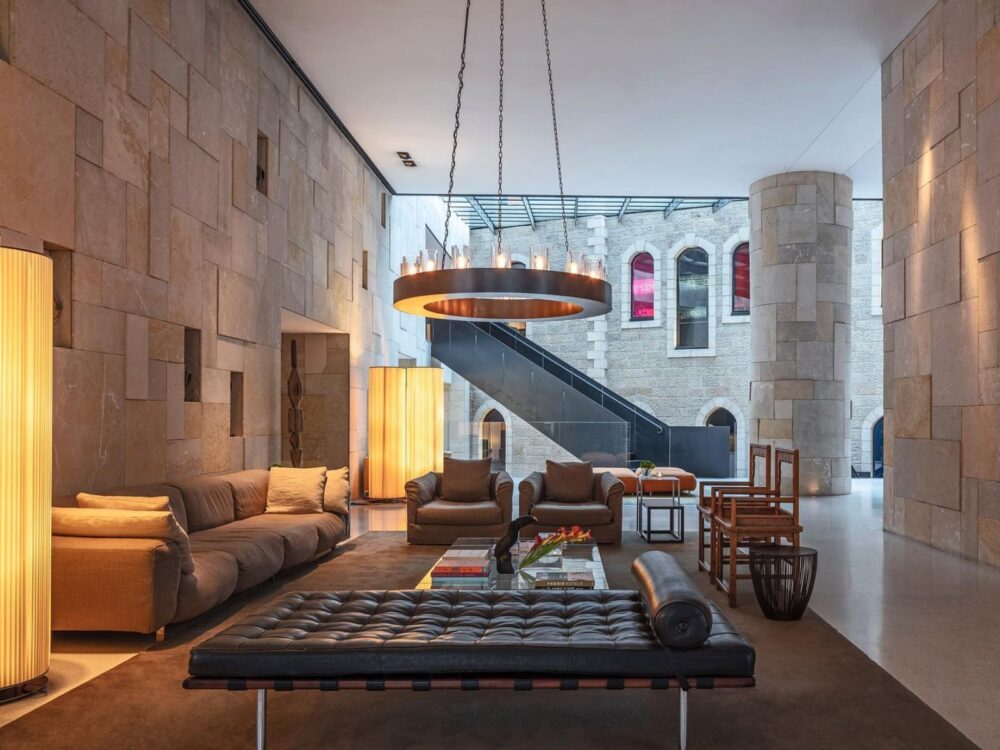 This sleek modern hotel with a decidedly Continental feel, designed by renowned Israeli-born architect Moshe Safdie, introduced avant-garde features when it opened in 2009: a liquid-crystal panel between the bed and bath areas, flat-screen integrated TV/PC, electronic “Do Not Disturb” doorknob signs. Recently, the 194 rooms and suites have been refreshed by their original designer, Pierro Lissoni of Milan.

Part of the Isrotel Exclusive Collection, The Orient has 243 rooms and suites decorated in an eclectic combination of old and new styles. 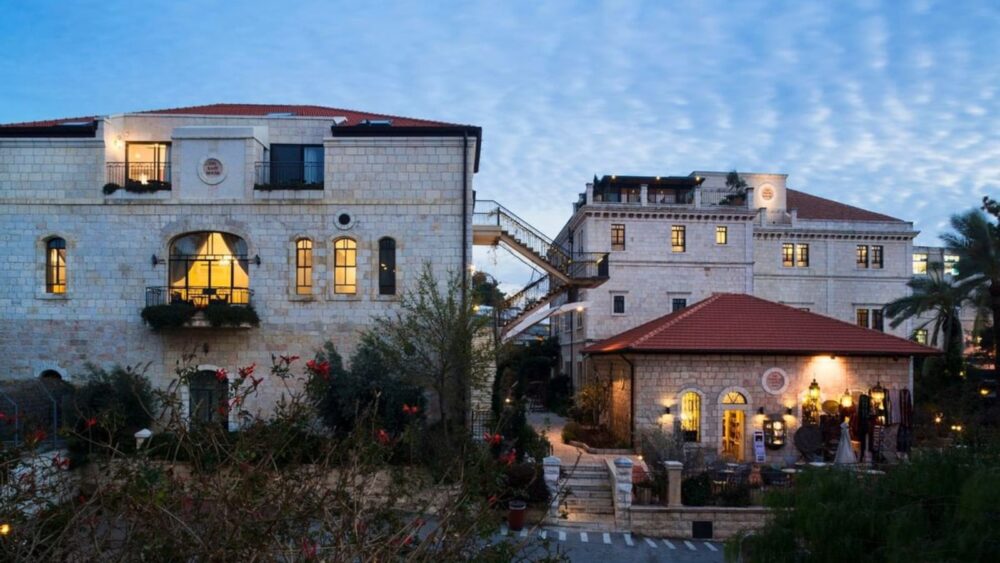 Photo courtesy of the American Colony Hotel in Jerusalem

This 94-room Ottoman-style complex near the Old City’s Damascus Gate was built around 1870 by the Turkish Pasha as a palace, and has been in use as a hotel since 1902. Each of its three buildings is complemented by a garden. 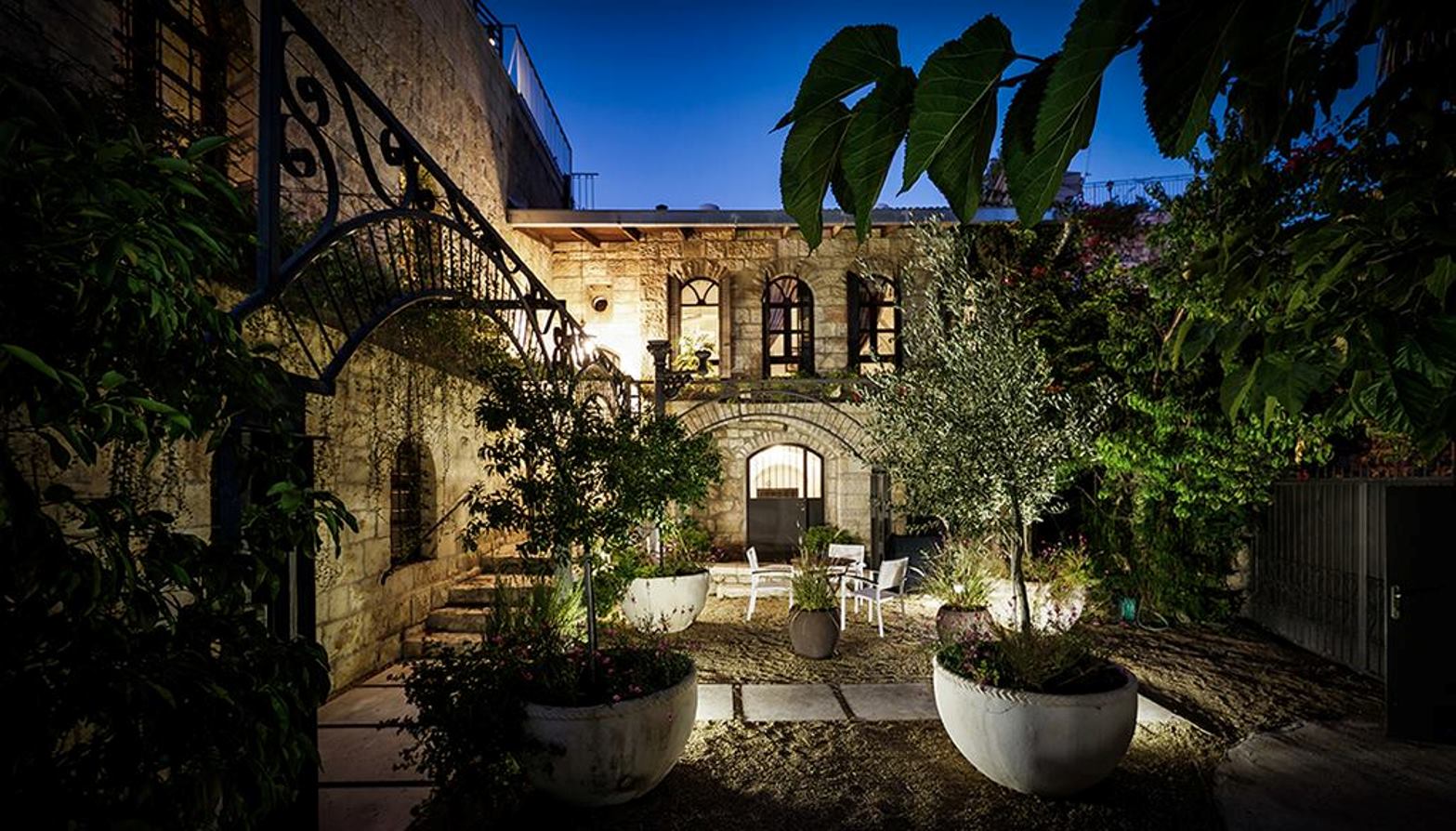 Located in a renovated authentic Crusader inn from about 1,000 years ago as well as a 200-year-old former synagogue across the lane, the 12-year-old Alegra Hotel offers six rooms and seven suites, each named after a pair of historical or mythical lovers.

The hotel is set in the quaint forested village of Ein Karem, which is part of the Jerusalem municipality and contains many churches and monasteries, art studios and galleries (and a famed chocolate shop!). 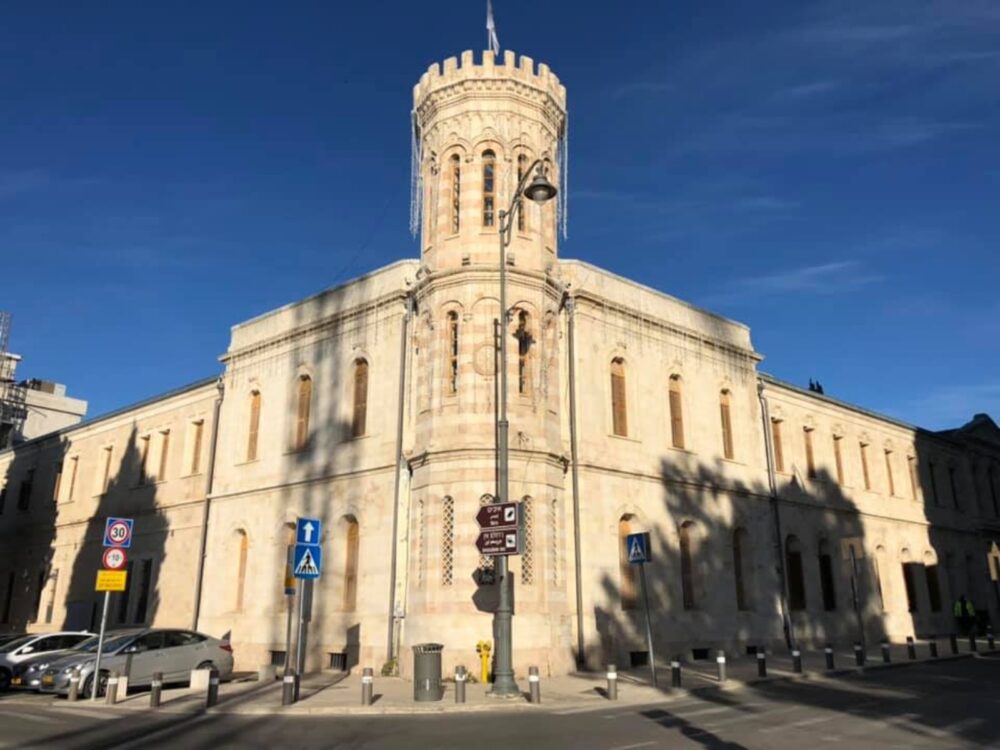 The Sergei Palace, built in 1889 to serve Czarist pilgrims and completely renovated in 2017, offers 20 rooms and two suites. Located a few hundred meters from the Old City, this hotel preserves the features of ancient Jerusalem architecture and contains a gallery and concert hall. 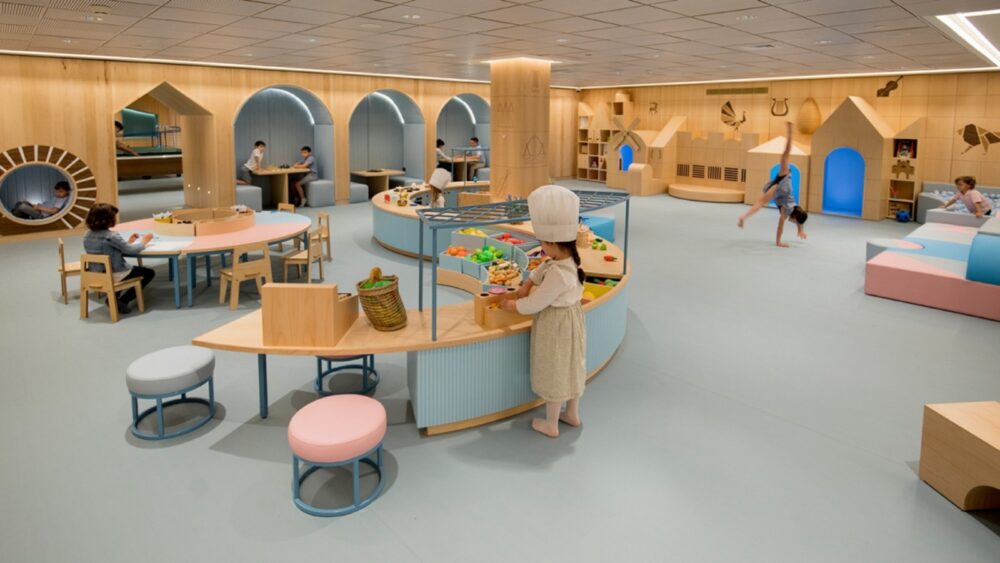 Like its younger sibling up the block, the Mamilla Hotel, the David Citadel was designed by architect Moshe Safdie and decorated by Italian interior designer Piero Lissoni.

It’s a 5-star property but surprisingly family-friendly with a fabulous 400-square-meter Children’s Play Center that includes miniature replicas of Jerusalem landmarks such as Machane Yehuda market and the Yemin Moshe Windmill, plus a miniature kitchen, living room and doll house. For teens, there’s a TV and computer corner as well as ping-pong, billiards, foosball, soccer pitch and gym.

A view of the Dan Jerusalem Hotel. Photo courtesy of Dan Hotels

With 502 guestrooms and suites, the Dan is Jerusalem’s largest hotel. Situated in the northern French Hill neighborhood, its magnificent terraced structure was designed by Israel Prize-winning architect David Reznik on the slopes of Mount Scopus.

Like most Dan hotels in Israel, the Dan Jerusalem offers The Danyland Club on weekends and holidays, where children can play safely under the supervision of a professional staff. For older children, the DanyClub offers computer games, Sony PlayStation stands, and a DVD library. And for preschoolers, DanyBaby is a fully equipped toddler clubhouse with an infant area and kiddie pool (in season). 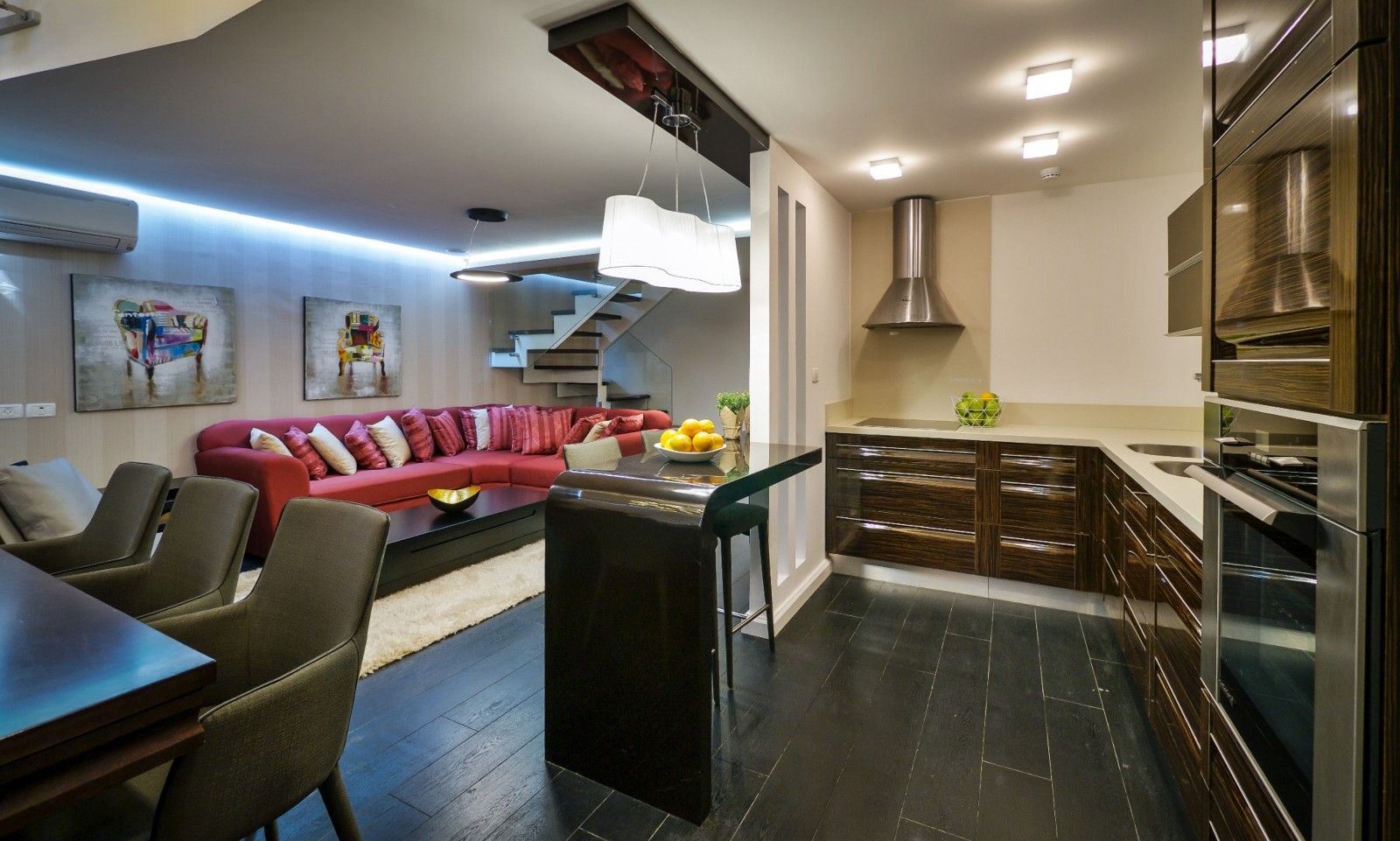 The suites in the 21st Floor Hotel are roomy enough for the whole family. Photo: courtesy

The 21st Floor Hotel is located on the upper two levels of an office building at the intersection of King George Street and the Ben-Yehuda pedestrian mall. Each of its 14 duplex suites has a full kitchen, living and dining area. Unlike most hotel rooms, this is roomy enough for the whole family to hang out. And there’s a cool bonus: a telescope pointing out of the living room picture windows to get the full panoramic picture of the city below. 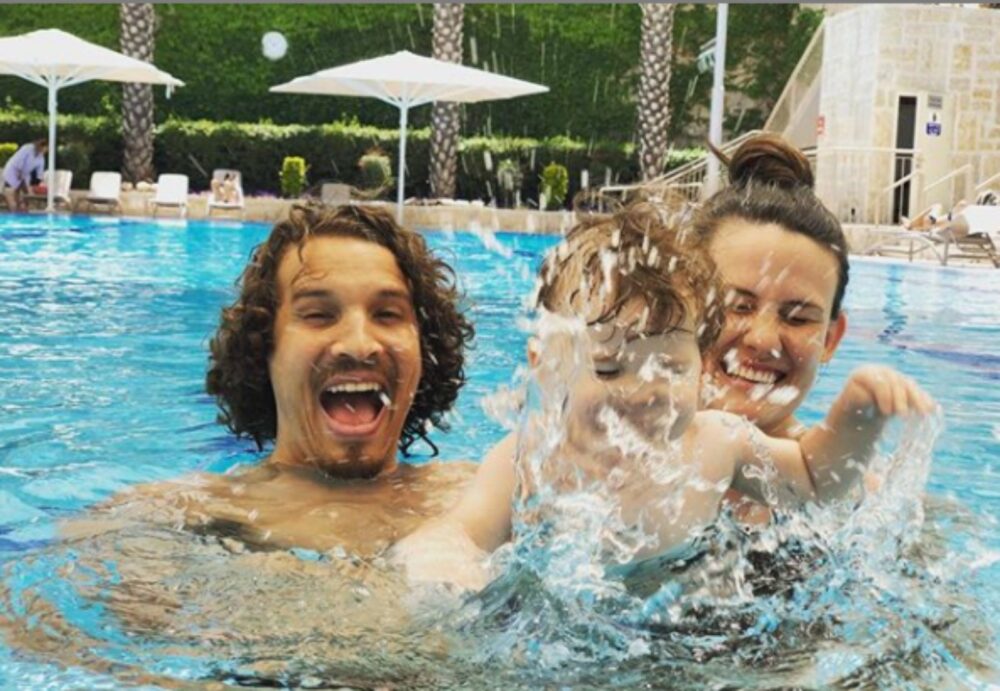 If you’re traveling with children, you’ll appreciate the pastoral, off-the-beaten-track location of the 126-room Hotel Yehuda near the Jerusalem Biblical Zoo, National Aquarium, Ein Yael interactive “living” museum and archeological site, and the huge Malcha mall – as well as the hotel’s playroom, lush grounds and outdoor kiddie pool open in the summer. Older kids will enjoy the giant chess set on the patio. Families can book connecting rooms, and cribs are available. 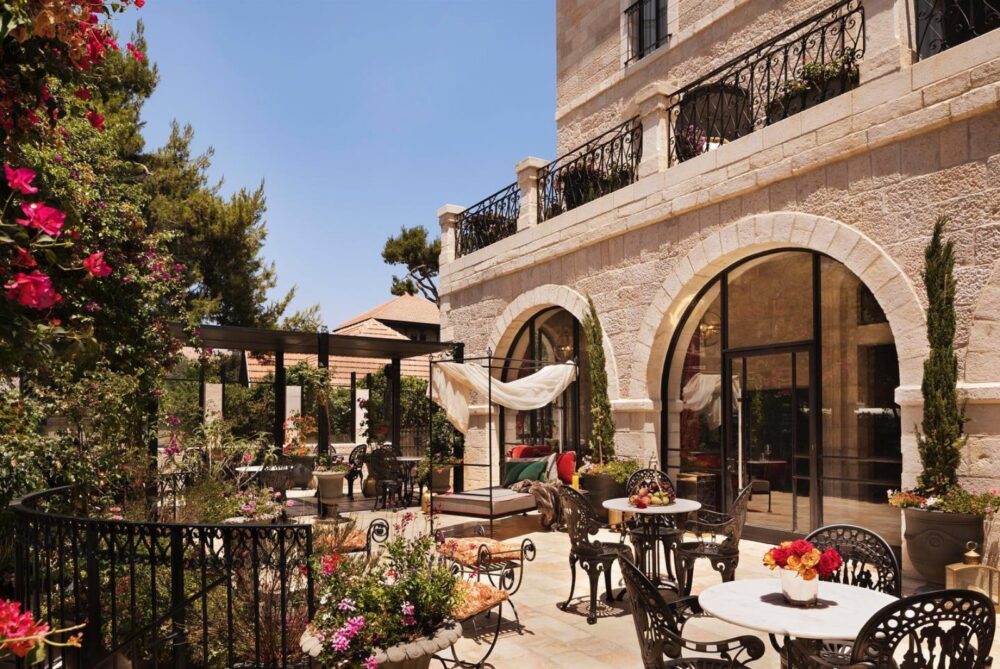 Housed in a restored 19th-century villa near the capital city’s historic Russian Compound, the 24-room Villa Brown is decorated in a fusion of neoclassical, Ottoman and contemporary styles in hues of red, emerald and mauve. The towering arched doorways were preserved for an authentic look, and the outdoor café is set off from the street by lush greenery, making it popular with tourists and locals alike. 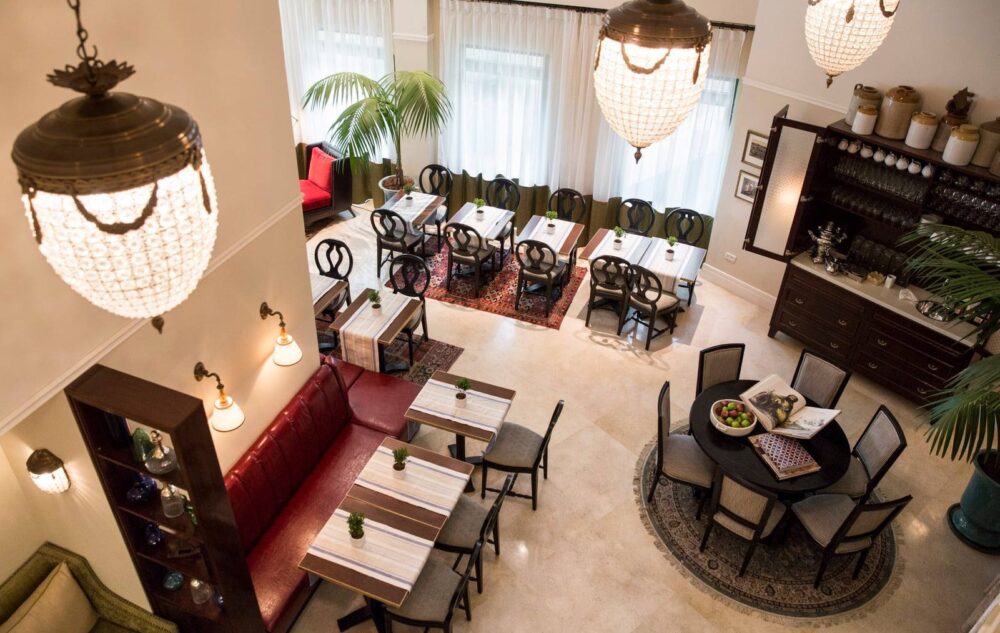 The 58-room Arthur Hotel is named after Lord Balfour and run by the Atlas Boutique Hotels chain. Decorated in an early 20th century theme complete with photos from that era, Turkish rugs, tiled floors and handcrafted Armenian plates in the bathrooms, the Arthur is tucked into the restaurant- and shop-filled Ben Yehuda pedestrian thoroughfare close to the light rail on Jaffa Road. 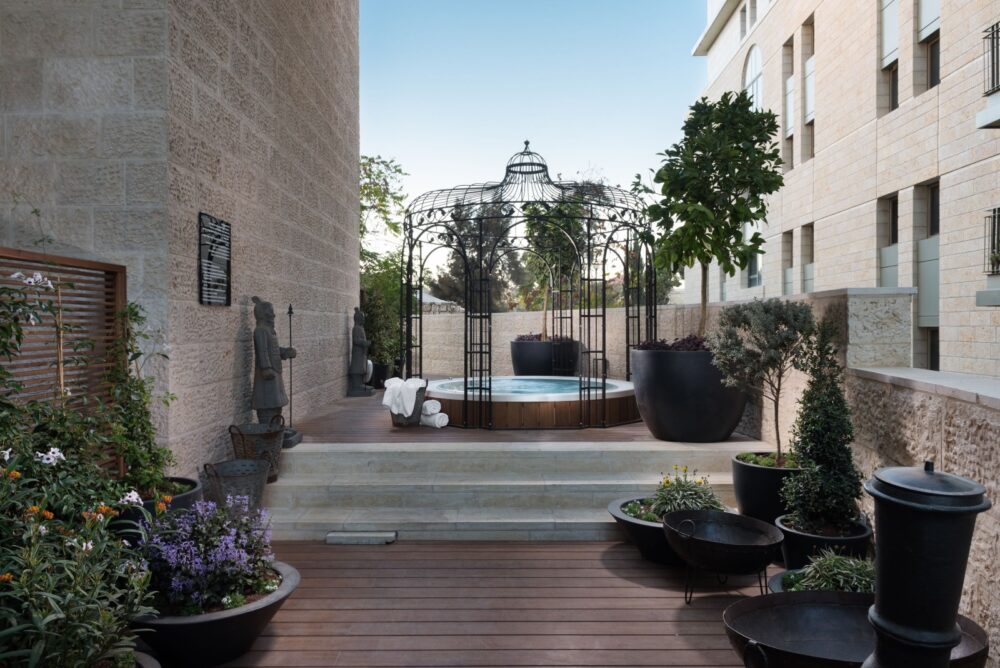 The Fattal chain’s Leonardo Boutique hotel in downtown Jerusalem has 74 rooms decorated in classic hues and bespoke furnishings. The highlights are the special touches in the public areas, such as a library, a refrigerated wine collection, and an intimate courtyard with a hot tub on a wooden deck, sun loungers, and plants – a little urban oasis.

Address: 3 Monbaz Street
Amenities: Spa, gym, kosher restaurant, business facilities for up to 90 participants, accessible rooms
Parking: For a fee in nearby lot
Click for reservations